Frankfurt on Wheels: The German Experience

Frankfurt on Wheels: The German Experience

I was given an abrupt wake-up call on my first day in Germany when I was scolded while walking to the store for being in the bike lane. Little did I know that the two-toned sidewalk signified two very different lanes—bike and pedestrian. Or as I think of it: the make-it-home-with-all-your-groceries lane and the risk-being-roadkill lane. I had heard the stereotypes about Germany—the efficiency, the no-nonsense women, the beer that flows—but it took the most time to get used to the bike culture. After a few months of observations and mistakes while riding my own bike, I picked up some key aspects of the German bike experience. Here are a few tips to help both the cyclist and average patron of Frankfurt’s city streets.

1.       Biking is not just about exercising, it’s about commuting.

I think my dad summed it up when he came to visit and commented that “there are just so many beautiful people on bikes.” I think what really shocked him was to see women in skirts and heels or men with suits commuting on their bikes. Bags and lunches are balanced. Helmets are seldom worn. Wicker bike baskets are still in style. And it’s not just adults that use bikes to commute. If you’re out in the morning, you’ll see gaggles of children with backpacks hanging haphazardly from shoulders as they peddle to school.

Maybe because commuting by bike is so common, German society expects children to learn how to bike at an early age. It’s common to see toddlers on push bikes—where kids push their feet against the ground instead of using pedals—beside their parents on busy city streets. I also learned from a German friend that many schools require children to learn how to ride a bike and have lessons on bike rules and safety. But no training wheels here! Push bikes are used by beginners to learn balance before transition to regular bikes.

3.       Frankfurt has many scenic bike trails…if you can find them.

Although I decided against commuting by bike, I did move to Frankfurt with the desire to continue long bike rides for exercise. With all the bikers I thought it couldn’t be too hard to find some decent routes. Wrong! I quickly learned that many bike paths were not completely paved and therefore a no-go for my triathlon bike. Most Frankfurt bikers have mountain bikes or hybrids that can handle rough terrain. I began to search for web sites that listed if a trail was paved or unpaved. As I was driving I would come across open fields and think…now how do I bike to that spot? Go west, I was told. Go east! Find the farmland, find the windmills. But how? It was only by hap and circumstance that I finally found a few scenic farmland routes that have become routine. Why are they so hard to find? Because many remain nameless and are therefore unknown to Google. I guess the fun is in discovering them and then remembering how you got there.

4.       Bike shops are not hard to find…finding them open is another story.

In a year’s time my husband and I have had our fair share of broken spokes and flat tires. We’ve come to love a small family-run shop not far from where we live. We’ve been able to practice our German but have also learned about German vacation practices. When the family is on ‘urlaub’ the store is closed. Unfortunately, during the summer months, your first, second, and third-tier bike shops could all be on vacation at the same time. It’s not a bad idea to learn at least the basics about how to fix your bike yourself or you could be waiting for quite a few weeks.

It’s Germany so I knew that there would be rules. I just didn’t know what they were! For starters, if you’re driving a car always—yes always—check for bikers before turning. They will be there. For bicyclists, know that your bike must have breaks, a light, and a bell. There is an exception for racing bikes. Follow the rules of the road, otherwise be ready to be fined by the police!

Biking around Frankfurt can be a great way to beat traffic and explore the city. And in time you’ll start blending in with the locals! I even took a stab at my first German triathlon. The pre-race meeting was efficient, the non-alcoholic beer flowed, and the German women flew past me on their bikes. 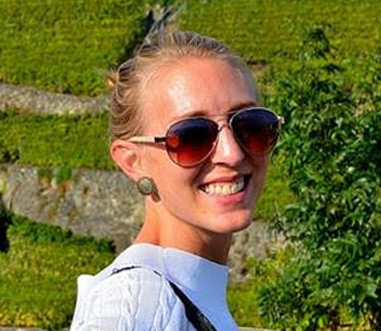 Lee Bennett has lived in Frankfurt for one year. She is originally from the United States and misses the beauty of fall in New England. During her time in Germany, she has enjoyed the ease of traveling around Europe, eating international cuisine, and finding new friends. She loves how new technology makes keeping in touch with friends near and far as simple as clicking a button.

This site uses Akismet to reduce spam. Learn how your comment data is processed.

This message is only visible to admins.